A Dream of Dragons

In April of 2020, Gabriel's Horn launched a virtual book club, featuring some of our many authors. Lauretta and Michael Kehoe were our final guests of the season talking about their first novel, A Dream of Dragons. 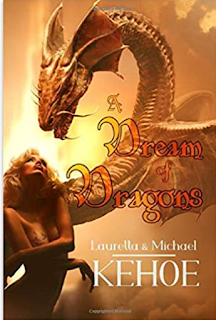 Laurie Kehoe
Lauretta loves science fiction and fantasy. Not finding many that reflected her Christian faith, she decided to write what she wanted to read. Then Michael added his input to A Dream of Dragons, the couple’s debut urban fantasy novel.  The story has been rewritten as Dragons in the Night, nominated as a Judge’s Favorite in the 2018 Ink & Insights contest.

Free-lance artist, Henry Williford was resigned to the single life. When he discovers a naked, helpless woman on a Florida beach, his life changes forever.  He names her Anne and is amazed at how quickly she learns to become a woman.

Their days are filled with joy and discovery, as together they seek to find the answers to Anne's elusive past, while their nights are plagued by dreams of golden dragons that soon become nightmares of black dragons, fire and death. When a forgotten enemy resurfaces and threatens to take the life of her new love, Anne learns of her amazing origin, but is faced with a terrible choice.

For the record, I read A Dream of Dragons even before it came out, and I really enjoyed it!

The Battle is O'er is now available!
Start from the beginning: Prelude One
~ ~ ~
If you like an author's blog posts, please like and share.
It helps us continue to do what we do.
For other posts on other authors:
PTL Perrin's Terra's Anthem
Seventh Born by Rachel Rossano
For more on my books, click the images:

When I'm not writing, I'm involved in a multitude of other projects, foremost among them

This year was our maiden voyage, with the theme of JOY. Our goal is to provide a paying market for poets writing in traditional and classical forms. I was delighted with the quality of poets who responded, with their impressive credentials and backgrounds and am very proud to feature THOMAS R. SMITH and DAN BLUM, two very accomplished wordsmiths. We have a number of poets from the Twin Cities, but also from around the United States, from Canada, and from the United Kingdom. I look forward to having even more countries represented next year.

If you're a poet and would like to submit, please visit our submission page.
Email Post
Labels: A Dream of Dragons author interviews authors fantasy Gabriel's Horn Gabriel's Horn Book Club Laurie Kehoe