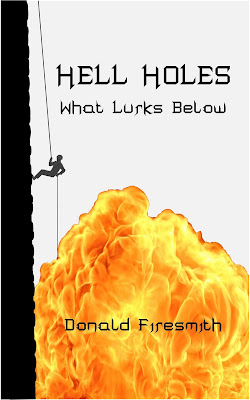 Hell Holes: What Lurks Below

When hundreds of huge holes mysteriously appear overnight in the frozen tundra north of the Arctic Circle, they threaten financial and environmental catastrophe should any more open up under the Trans-Alaska Pipeline or any of the many oil wells and smaller
pipelines that feed it. An oil company sends a scientific team to investigate.

But when the geologist, his climatologist wife, two of their graduate students, a local newspaper reporter, an oil company representative, and a field biologist arrive at one of the holes, they discover a far worse danger lurks below, one that threatens to destroy all of humanity when it emerges, forcing the survivors to flee south towards Fairbanks. A geek by day, Donald Firesmith works as a system and software engineer helping the US Government acquire large, complex software-intensive systems. In this guise, he has authored seven technical books, written numerous software- and system-related articles and papers, and spoken at more conferences than he can possibly remember.

He's also proud to have been named a Distinguished Engineer by the Association of Computing Machinery, although his pride is tempered somewhat by his fear that the term "distinguished" makes him sound like a graybeard academic rather than an active engineer whose beard is still slightly more red than gray.

His first foray into fiction is the book Magical Wands: A Cornucopia of Wand Lore written under the pen name Wolfrick Ignatius Feuerschmied. He lives in Crafton, Pennsylvania with his wife Becky, and his son Dane, and varying numbers of dogs, cats, and birds. His magical wands and autographed copies of his books are available from the Firesmith’s Wand Shoppe.

* Are you a full time author or do you have another job as well and if so how do either or these fit in with writing time?

During the week, I work as a principal engineer at the Software Engineering Institute, a Federally Funded Research and Development Center, where I help the US Government acquire software-reliant systems. That leaves evenings and weekend mornings before the family wakes up for writing.

* Do you write on your novel daily or do you try to have days off?

I would love to write every day, but reality rears its ugly head and so I only work on my books about 5 days a week, and at least one of those days is devoted to marketing.

* Do you go back to published books and want to change them in any way?

Back in the 1980s, I learned that no one writes software without bugs in it. Thus, one always has to go back, uncover defects, and make fixes and improvements. The same is true with books. I find that even after professional editing, a group of beta readers, and my own obsessive rewriting, people still find potential improvements and just plain mistakes. One of the reasons I stopped using professional publishers and became an indie author is that it (together with on-demand printing and ebooks) enables me to make improvements whenever I want.

Currently, I am working on writing Hell Holes 3: To Hell and Back, and I hope that no one discovers a problem or makes a recommendation that would require significant rework on the first two Hell Holes books.

* Can you give us a little insight into any fantasy characters in your latest book?

The fantasy characters in my Hell Holes series are various types of high demons (humanoids such as devils and imps) and low demons (beasts such as gargoyles and hellhounds). Given that demons are stronger than humans, impervious to fire, and their wounds magically heal within at most a few minutes, they are relatively fearless when attacking humans. Given that devils can glamour humans into looking human, they feel that humans are stupid and gullible.

Finally, the demons have a warrior culture based on conquest and slavery that makes them feel that humans are totally beneath them, unworthy of compassion, and useful only as slaves or food. They enjoy torturing their victims, believing that terror makes the flesh taste better (“Fear is the best sauce.”).

* Is your the world in your book like earth or is it a fantasy world?

My current book series takes place at the current time on Earth, but in the third book, my human characters must travel to an alien world to stop an alien invasion. Because
the aliens are demons with dark magical powers, the demon homeplanet is my current fantasy world.

* What is the time period setting of your latest book?

While my science fiction short stories were usually significantly in the future, my books tend to be set in either the present or the very near future. I believe that this founding in current reality makes the fantastic parts of the book more believable.

* Do you prefer to write as a series or one off books?

I like to write both one-off books and series, but I think I prefer series, although that may be because I am currently writing the third book in a series. A good book often provides such a rich background and such interesting characters that it literally cries out to be the start of a series.

* Do you like to use lots of subplots or do you think just confuses?

I am incredibly impressed (and not a little intimidated) by authors who can weave several subplots together into a unified whole that ties up all of the loose ends in the final book. For example, I just finished reading The Golem and the Jinni by Helene Wecker, and I was struck by the way she tied the Jewish and Syrian subplots together at the end.

* How do you think you would feel if you received a really bad review that seemed justified?

I hope that after a very short bout of anger and depression (I’m only human, after all) that it would motivate me to both fix the offending book and improve my future writing.

* Do you think all readers should do reviews to help the writers improve?

Reviews are absolutely critical for several reasons, especially for indie authors. For example, it is very difficult for an author to promote his or her books without 20-50 Amazon reviews. Reviews also critical for helping readers decide whether to buy and read the book. Lastly, a good review helps the author know what the reviewer liked, and just as importantly, what they didn’t like.

A wise author will carefully consider a reviewer’s constructive criticism as an opportunity to improve the book or the author’s writing in general. That said and knowing just how much work is involved in writing, I hate giving books review rankings of only one or two stars. Instead, I often contact the authors directly with specific issues, especially typos, grammar, and word usage as well as if I feel the book truly deserves only one or two stars.

Luckily, I rarely have to do that because I almost never complete reading such disappointing books and refuse to write a review if I haven’t read the entire book.

* When you receive reviews, do you find yourself influenced to make changes?

Absolutely. I have made significant changes and improvements to Hell Holes: What Lurks Below based on constructive criticism from reviewers. However, to be valuable, a good review has to be specific. One-line reviews (“I really loved it.” or “I hated it.”) may affect my ego, but they don’t improve the book. It’s a little like telling a parent that their child is beautiful or ugly; neither changes how the child looks.

If you liked this article, you might also like
Dan Blum: The Feet Say Run is Live!
Howard Jay Smith: Beethoven in Love
Irena Shapiro: Time Travel Tales
or other posts under the Author Interviews and Authors labels