Welcome back to Howard Jay Smith for the second movement of his interview about his new novel Beethoven in Love Opus 139.  To learn more about Howard, see the first movement.

Why Beethoven? What drew you to him? Why Opus 139?


Beethoven’s deafness for me was the key. Just as the world’s greatest composer could not in his later years hear his own music, so too have I been denied the ability to play, write or compose music due to my dyslexic tendencies. I have always loved his music and found in Beethoven’s struggles, the path to understand his suffering. He was a flawed human – just as most of us are – and in him, I saw the universal.

Just as Beethoven’s music and its relationship to his life’s challenges resonant with those universal truths that add insight into our own lives, so, too, can we ask: How does any of us come to terms with the failings of our life and find peace at the moment of our death?

Finding the universal: This is part of the power of knowing history, of telling stories.  We learn and grow from them, as we see how others have handled--or failed to handle--pain and adversity.  Can you tell us a little about the research you did for the book?

At first, when I considered doing a novel about Beethoven, I thought I would be able to read a biography and then create a story to fill in all the blank spaces. I very quickly realized that scholars collectively knew an enormous amount about him. There were very few blank spaces. In order to do a proper novel I knew I would have to fully research his life before writing a single word. And that would prove to be an enormous task in and of itself.

When I grasped the size and complexity of the task before me, I thought about all of my mentors, John Gardner, John Irving, Tim O’Brian, etc. They had all won National Book Awards or garnered similar honors. If I was going to devote the next five years of my life to this task, I decided not to go forward unless I could write the book at a level of quality such that the completed novel could arguably be in the competition for a National Book Award. Given the feedback I have had so far from a cadre of fellow writers, I believe I have achieved that goal.

Still, before writing a single word, I devoted myself to researching every aspect of his life for a solid two years. I read every major biography; his diaries; all six volumes of the letters; and every account of his life as described by his friends and associates. I studied the entire historical era, from Voltaire and Mozart through Napoleon and the Archduke Rudolph. I bought recordings and listened to every major piece of his music I could find and I attended every concert in the region whenever Beethoven’s music was on the program. I lived, breathed and even drank a “Beethoven” branded white wine.

I read each of these books a minimum of three times. Once to get a sense of its overall content. A second time to highlight with a yellow marker those parts I though relevant to the story I wanted to tell, and a third time to actually copy those segments into a running notes file organized chronological (of his life) that eventually ended up being two hundred pages itself.

How I can relate to this!  Book after book on medieval history, Scotland, and the Bruce, and pages and pages of notes marked with highlighter, and white boards covered with sticky notes!  Not surprisingly, considering the subject, I've learned a lot that surprised me.  What did you learn in the process that surprised you? 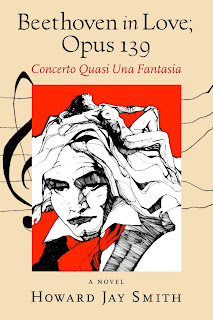 There were two big surprises: My undergraduate degree was in Asian Studies. I knew Chinese, was familiar with most of the major texts of Buddhism, Taoism, Hinduism and so forth, and so the biggest surprise was to discover in his diaries that Beethoven was reading, copying and commenting on Eastern Philosophical texts, including the Bhagavad Gita. Most Beethoven scholars over the past two centuries have been musicologist and these quotes went right over their head. Few of them realized that Beethoven was the classic “seeker,” trying to find meaning and comprehension of the conditions of his life in the collected wisdom of all humanity. This search is the essential motor of the book.

The second surprise came while reading about Napoleon. After his retreat from Moscow and his ill-fated invasion of Russia, he stops in a tiny village in what is now Belarus and is finally safe. He had lost 90% of his army, some 600,000 troops in either combat, from disease, starvation or from the brutal winter that had frosted over Eastern Europe that year. In that village, he receives a dispatch from Paris. People back home think he’s dead, there’s been an attempted coup and he must return right away. He turns over command of his army to his Generals and races back by sled in the dead of winter to Paris in a then record two weeks.

The village, Smorgonie, whose name I had never seen in print before, is my maternal grandmother’s village. Maybe a thousand people lived there. Here I was researching events from two hundred years ago and suddenly discover they crossed right through my own family’s life. I later found an etching of that scene done by a Polish artist in 1911 to commemorate the war and invasion. 1911 is the
year my grandmother left and came to America. Knowing that, I ended up setting several key scenes of the novel in that village.

The premise of the book--Beethoven's request for one day of joy before he dies---is a poignant one that I'm sure many people can relate to. As Thoreau said, "Most men lead lives of quiet desperation."  What inspired you to think of such a question in relation to Beethoven--who most definitely did not go to the grave with the song still in him?

I had my own near-death experience over four decades ago that resulted from a brutal motorcycle accident. In that moment I experienced an immense sense of peace and calm. Yet in contrast, Beethoven shook his fist in apparent anger. As I noted above, that was the triggering inspiration for “Beethoven in Love; Opus 139,” and it is also the question the novel attempts to answer. What, in that final moment, would it take for Beethoven to find a similar tranquility and calm? Therefore, in a metaphorical sense, the novel begins, unfolds, and ends in that final moment. The opening line of the novel is: “By all accounts, my funeral was a grand success.”

What would it take to find tranquility and calm?  A powerful question, and one that we all should be asking.  I talk with my piano students about the events of Beethoven's life as they influenced lesser known middle part of  Fur Elise.  However, few people are aware of the story behind that wonderful piece.  So, of all Beethoven is known for, what led you to focus on the women he loved?


There are three major issues in his life: his deafness; his inability to find a woman to love and marry; and his inability to have a family life. All of these are explored in depth in the novel and they are all entwined with each other. Still, one of the most famous love letters in all literary history his Beethoven’s “Immortal Beloved,” letter written to an unnamed woman in July of 1812 when he was forty-two. Outside his actual music, there is more written about his aspect of his life than anything else so it felt natural to use the question of which woman was his true beloved as one of the unanswered questions that drives the story forward.

What does Beethoven's life have to teach the modern reader?


And as the character Johann Gardner says in the book, “What is a novel but a collection of lies we tell to reveal greater truths? Beethoven’s struggles and his failings are in many degrees little different than what each one of use goes through in the course of our lives. There is a universality to these issues that transcends any particular person, place or time in history. To understand
Beethoven’s life, is to perhaps understand our own lives. One of my friends observed that I have actually written the life of Buddha as lived by Beethoven. One does not get to paradise, even metaphorically without coming to peace with all of the failings and conflicts of our lives.


Thank you, Howard, and I'm looking forward to the 'third movement' of your interview tomorrow.

To learn more about Howard, visit his website and facebook page.  To read the rest of the interview, see PART ONE and PART THREE.


If you enjoy an author's posts, please like and share.
It helps us continue to do what we do!