To my Blue Bells Readers, may I introduce Howard Jay Smith.  I 'met' Howard online, where I network with numerous authors.  Over the years, I have featured a number of authors on my blog who write tales of time travel, stories of Scotland, or musings on music.  One book that has really stood out to me in all those years is Brendan Carroll's Tempo Rubato: Stolen Time, about Mozart being brought into our present day.  I loved the vivid portrayal of a great composer--most especially the way we say Mozart as a man, a real person, rather than as a plaster bust of someone untouchable and above humanity.

When I saw Howard's facebook page and read the premise of the book--Beethoven asking God for just one day of pure joy--I felt the excitement of the promise of showing Beethoven, too, as a very real person.  I sent Howard a message, inviting him to be on this page, and am excited to host him here today, in the first part of his interview. 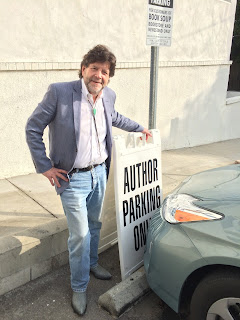 I am an award-winning writer living in Santa Barbara, California. “Beethoven in Love; Opus 139” is my third book. A former Washington, D.C. Commission for the Arts Fellow, & Bread Loaf Writers Conference Scholar, I taught for many years in the UCLA Extension Writers’ Program and have lectured nationally. My short stories, articles, and photographs have appeared in the Washington Post, Horizon Magazine, the Journal of the Writers Guild of America, the Ojai Quarterly, and numerous literary and trade publications. While an executive at ABC Television, Embassy TV, and Academy Home Entertainment, I worked on numerous film, television, radio, and commercial projects. I serve on the Board of Directors of the Santa Barbara Symphony - "The Best Small City Symphony in America" - and am member of the American Beethoven Society.


I have an interview at Book Circle Television Online.


I am already at work on my next project, a novel about Mozart and his librettist, Lorenzo Da Ponte.


Early in my career I was a Middlebury College Writers’ Conference Scholar and trained under people such as John Irving, Toni Morrison, Tim O’Brien and the late John Gardner, with whom I also undertook a number of other writing and radio projects.

You've written for a number of big publications and worked with film, television, and radio. How did you get your start in writing?


I started freelancing in my mid-20’s after attending Bread Loaf and managed to sell a few articles and stories but certainly not enough to live on or leave my day job in education administration. After a few years, I moved to LA from Washington to attend film school at the American Film Institute, specializing in screenwriting. That led to work at ABC-TV and Embassy Productions as a Development Executive. And after a few years with the studios, I went back to writing TV and Film scripts.

When did you start writing novels? Did anything in particular lead you to writing fiction?


I was an avid reader of novels even as a child and started attempting to do my own soon after graduating college. Writing fiction always came naturally to me.


You're on the board of directors for the Santa Barbara Symphony. Do you play an instrument yourself?


I do not play any instruments at all, having failed even on something as basic as the drums in junior high. What I did not know then was that I suffered from various learning disabilities related to dyslexia – though not literally dyslexia itself. As much as I love music of all sorts, my brain cannot consciously process it. No matter how much I study, I perpetually have the musical recall ability of a gnat.

Tell us about Beethoven in Love, Opus 139

By several dependable historical accounts, in his last seconds of conscious before his death, Beethoven raised his fist and shook it at his Creator. In my novel it is at this moment when Beethoven demands answers to the question that has bedeviled him most of his life: why it is that he, whose hearing once surpassed all others, has been cast out as history’s cruel joke, a deaf composer who was also denied the comforts of family and enduring love?

For all his creative genius, Beethoven was a flawed man who led a troubled life and in that last tick of the clock, he re-experiences the most traumatic moments of his life. And he pleads with Providence to grant him one final wish—one day, simply a single day of pure joy.


That triggering inspiration for “Beethoven in Love; Opus 139” is also a question the novel attempts to answer. What, in that final moment, would it take for Beethoven to find peace, tranquility, and calm?

A profound question, and one we should all be asking ourselves.  What happens then?


From there Beethoven’s final dream-like journey escorts him through a fog of memories in which he must confront his many failings before he can be allowed to pass through the Gates of Elysium and find the brief happiness he seeks.

Thank you, Howard, and we'll be back over the next two days with Part 2 and Part 3 of the interview, on some fascinating things learned in the course of researching this unique story.


If you enjoy an author's posts, please like and share.
It helps us continue to do what we do!