the upcoming MY NAME IS SAUL … and many more!

Before we dig in, let me announce my new email list and make a shameless plug to ask you to sign up for my email list. To sign up for my e-mail list: CLICK HERE. If you're signed up on my blog, you will receive new blog posts. The email list is different, and will include news and updates both for my personal work and for Gabriel's Horn.

Tell us about your newest book or series.

My Name is Saul is the second of my novels of the ancient world series. This is the Saul of Tarsus who became St. Paul, apostle of the Gentiles. I am expecting it to be released this winter.

Lin Weeks Wilder holds a Doctorate in Public Health from The University of Texas School of Public Health at Houston and has over thirty-five years of experience in academic health centers. During those years, Wilder published extensively in fields like cardiac physiology, institutional ethics, and hospital management. 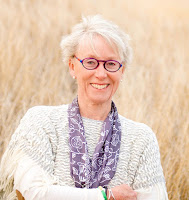 After ten years of running an online marketing business, and publishing four self-help books, Wilder switched from writing non-fiction to fiction.  The Fragrance Shed By A Violet: Murder in the Medical Center, Do You Solemnly Swear? A Price for Genius and Malthus Revisited: The Cup of Wrath comprise the Dr. Lindsey McCall medical thrillers with many references to the Texas Medical Center where Wilder worked for 23 years. Finding the Narrow Path is an unplanned surprise return to non-fiction. Her latest novel is I, Claudia: A Novel of the Ancient World.
https://amzn.to/2l2BcMz
Lin is the recipient of numerous awards for her work, including a Feathered Quill, three    NABE Pinnacle Awards, two Literary Titans and three IAN Best Books awards

What are the three most important rules for writing a novel
They probably exist but no one knows what they are. I am paraphrasing a great quote by Somerset Maugham.

How to you handle writers block?
For me, those days, weeks, sometimes months when the words won’t come are times I need to think. But it’s a weird kind of thinking. Meaning that while watching a movie, or reading someone else’s novel, the “AHA’ hits. Maybe that’ writers block for some but for me, it’s when I need to be patient, wait.

What is the single most important attribute for a writer?
Persistence. Years ago, I write this and still believe it to be true: The most important attribute for a writer is also the most important trait of a musician, medical doctor, engineer, stay- at- home Mom or anyone in pursuit of anything under the sun. There are many names for this one characteristic: persistence, grit, determination, and tenacity are a few. It is never intelligence or looks or money, although many of us assume these are the reasons that Bill Gates or Jennifer Garner or Mark Zuckerman are so successful.

What books influenced you the most and did they impact your own writing?
As a kid and an English major, a million years ago, The Great Gatsby; This Side of Paradise; Man for All Seasons by Robert Bolt. Later, A Prayer for Owen Meany, Mastery, The War of Art.

What inspired your book?
On a hike about 9 years ago, the name Lindsey McCall appeared in my head. I could see her...blonde, an interventional Cardiologist...in my head. And a few months later, the skeletal outline to my first novel, The Fragrance Shed By A Violet. My initial reaction? Fiction? Really? After all these years? (Like most undergraduate English majors, I had dreamed of writing a novel but gave it up as the ‘childish stuff’ years ago. 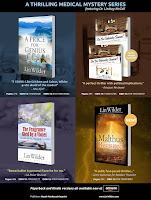 Who is your favorite character in your book? How much of yourself is in that character?
Since I’ve published six, soon to be seven novels, I have several favorite characters. In fact, it was due to that fact that I decided to do the Lindsey McCall medical mystery series. Quick and brief story apropos to that: For a host of reasons, the first novel took forever to write. I suppose there is something of me in many of my characters.
When, finally, The Fragrance Shed By a Violet was done, my husband was congratulating me, looked at my expression and said, “You don’t look very happy about it.”
My reply: “I miss the characters...I feel as if I’ve lost some of my best friends!”
John’s reply:” Then write a sequel.”
Why didn’t I think of that? So I did and then another...

They say write what you know. How much of your life, your experiences, your career or hobbies, come out in your writing?
A lot. That first novel was very much based on my own experience in academic medical centers, especially the Texas Medical Center in Houston. The medical aspects are familiar since I published a textbook on Cardiac pathophysiology and my own clinical experience. Some of the primary male characters in the Lindsey McCall series are Marines, inspired by my former Marine husband who spent over 20 years counseling former combat soldiers.

We can’t write only what we know. What research have you done and how do you research?
For each book I write, I do extensive research...making sure that facts have a basis in reality; that places can be described with enough detail that the reader can readily picture the place, event or the character. For the first novel, placed in Houston Texas, I spent a week with a basic science researcher at University of Houston Medical School, and Huntsville, Texas to see the prison and the town, the general area. Since I was unable to get inside the prison, I found a book written by an inmate describing the cells. And downloaded the book given to each new prisoner.
Normally, I study, scan something between 10 to 20 books, additionally, online research of articles and books. For the novels of the ancient world, I did extensive research on ancient Greece, Rome, Israel.

What are you working on now or what is next for you? My Name is Saul.
I expect to be released late this year. Next, I will return to write the fifth Lindsey McCall medical mystery. Current working title: Genderless.

Who or what  has inspired you most in life and why?
God has created me to do Him some definite service. He has committed some work to me which He has not committed to another. I have my mission. I may never know it in this life, but I shall be told it in the next. I am a link in a chain, a bond of connection between persons.
He has not created me for naught. I shall do good; I shall do His work. I shall be an angel of peace, a preacher of truth in my own place, while not intending it if I do but keep His commandments.
Therefore, I will trust Him, whatever I am, I can never be thrown away. If I am in sickness, my sickness may serve Him, in perplexity, my perplexity may serve Him. If I am in sorrow, my sorrow may serve Him. He does nothing in vain. He knows what He is about. He may take away my friends. He may throw me among strangers. He may make me feel desolate, make my spirits sink, hide my future from me. Still, He knows what He is about.”

― John Henry Newman
I find this most useful during the days or weeks when I have no idea what I am doing.

What do you think is the most important thing, in order to live life well?
Meaningful work is critical for happiness...work that challenges, stretches, frustrates. Believing...knowing... that we are using the gifts we have been given to the best of our ability.

TO SEE MORE ABOUT LIN'S BOOKS, CLICK ANY IMAGE BELOW: