How do the Davids of history fight the ever-present Goliaths? Sometimes, a well-aimed stone and a bit of luck (or God's help) does the job. In the case of Robert the Bruce and the small country of Scotland, standing up to the might of England, with a much larger population, bigger horses, better-equipped knights, stones might not quite do the job. 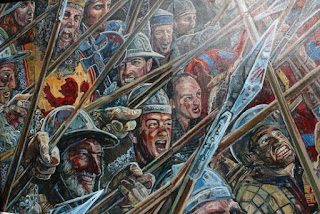 Bruce did have one piece of luck on his side: Edward II was not his father. He was not the knight, king, or commander his father had been. He was not liked or respected by his people. Some sources, not worrying about his feelings overly, say he 'lacked the dignity' of his father, and 'failed miserably' as a king. His lavish spending, including on male favorites such as Piers Gaveston, made him unpopular with the lords. This, and other issues led to the baronial revolt, and of course, it was easier for Bruce to re-take his country with the invaders pre-occupied with fighting amongst themselves.

Despite this, Bannockburn was still a pitched battle--something the Bruce had done his best to avoid throughout his years fighting England, and for good reason. The English routinely had much larger forces, and guerrilla warfare gave the Scots a fighting chance (no pun intended--well, maybe not). But faced with two forces meeting face to face on open field, Bruce found other methods.

The first of his strategies in defeating an army rumored to be anywhere from three to five times larger than his own, was to get there first and choose his ground. Bruce had long been a master of this, in battles which will be discussed later. Bannockburn was no exception. He knew the road the English must take to reach Stirling Castle. Remember, Bannockburn stemmed from the agreement between de Mowbray, the commander of Stirling Castle, and Edward Bruce, that de Mowbray would turn Stirling over to the Scots if Edward II did not send reinforcements by Midsummer's Day. This is what Edward II was attempting to do, and what Robert Bruce and the Scots were trying to prevent. With that destination in mind, Edward's mighty army, his 2,500 warhorses, 500 light cavalry, 2,000 Welsh bowmen, and tens of thousands of foot soldiers, marched up the old Roman road.

The Roman road ran, at one point, between woods (The New Park) on the west and a bog (the Carse) on the east. The deadliest part of England's army was its cavalry. But everybody has their Achille's heel. Even a highly trained knight armed with deadly weapons, atop a charging warhorse. The one thing such a knight on his warhorse really needs is firm ground to support the weight. And at this stretch of the old Roman road, there was very little of that. By arriving first and staking out this section, Bruce created a situation in which 1) only a small part of the 20 mile long army could come through at any given time and 2) those that strayed from the solid path, or were forced to fight beyond it, would have one of their greatest assets--size and weight--turned against them, as they found themselves mired in the boggy ground.

Bruce did not rise to power in Scotland, however, by relying only on what the landscape gave him. He came early, and did not sit idle while he waited. In the weeks before England arrived, he set his men to digging 'murder pits' all over the carse across which the English would charge. These pits were deep, and filled with spikes sticking straight up. The pits were covered over with a camouflage layer of branches and leaves culled from the New Park wood. Normally, I'd have to say that's not very nice. But then again, if I knew a knight was going to be charging at me swinging a mace and sword to crush in my skull, I think I'd do the same thing.

Bruce had used this strategy in previous battles. Nigel Tranter novelized the results in The Path of the Hero King. The first wave of cavalry hit the first row of murder pits and went down. The knights behind them were unable to stop, their horses simply not being so agile. Eventually, enough horses had gone down in these pits that further waves were able to simply ride over the bodies. They did not count on there being a second row of murder pits. Or a third.

For those horses who escaped the murder pits, Bruce had another surprise: caltrops. A caltrop is a giant, four-armed jack. No matter which way it lands on the ground, a spike is sticking straight up, waiting to pierce a hoof. If your name is Drummond, they may be part of your family history, as Sir Malcolm de Drymen is credited with strewing them on the ground that day. It is said that the caltrop on the Drummond arms, and the motto Gang warily stem from this moment in history.

For those cavalry who survived both murder pits and caltrops, Bruce had his schiltrons waiting. Those who saw Braveheart will likely remember the scene in which the Scots wait, with 15 foot pikes flat on the ground, until it is too late for the charging English cavalry to stop. The pikes come up, and the charging horses impale themselves, and sometimes their riders, on the pikes.

The drawback to this method was that it was purely defensive. Bruce shortened the pikes to a more manageable length and trained his men to march together, hundreds together, with pikes pointed outward, thus making the schiltron a mobile, offensive force, the only power in the world that could take on mounted cavalry. Bruce had six schiltrons at Bannockburn.

One of the more famous stories to come out of the battle is that of Sir Robert Clifford and his 700 English cavalry attacking a schiltron. He succeeded in getting himself and a large number of his knights killed or captured. (One of these was Sir Thomas Gray, whose son later gave us one of the few written records of the battle based on first hand accounts.) The rest scattered, realizing the futility of the attempt.

Knowing from past experience that the archers were a danger to his strongest weapon, the schiltrons, Bruce dispatched Keith's cavalry to deal with them.

Bruce's plans and choice of battleground not only destroyed much of the English cavalry before they could even begin to fight, but prevented tens of thousands of footmen from ever fighting at all. Because of the narrow entry through which they must come, these soldiers were trapped behind the knights, and unable to fight.

Finally, there is the storming from Coxet Hill (or Gillies, according to some). Some say it was the Knights Templar. Others say it was Bruce's reserve army, and still others that it was the 'wee folk,' or townfolk, racing to battle with their homemade weapons and farming tools, waving blankets and homemade banners on poles, and thus appearing to the English to be another army.

The English had gone into the main battle already demoralized. The destruction of their archers by Keith's light cavalry and the apparent appearance of a fresh army were the final blows. Edward II, with a host of his followers, turned and ran. In the chaos that followed, many of the English drowned trying to cross back over the many waterways--the River Forth, the Pelstream, and the Bannock Burn--which hemmed them in.

Sources contradict one another, and arguments rage as to how many fought on each side at the battle of Bannockburn. (The number I've given above are only one source, and vary widely in others.) But what is undeniably true is that the Scottish forces were heavily outnumbered, at least three to one, and some say as much as five to one. And yet, with the foresight of Robert the Bruce and his years of creative warfare against a much stronger army, they were able to not only win, but completely rout their Goliath.

Scotland in the Eyes of the Author