Thomas the Rhymer and the Fairy Queen

Iohn appeared in the arched doorway, crossed the small space, and rested his arms on the wall beside Niall. "Feeling better?" he asked.


"At times." The summer breeze lifted Niall's hair. He tugged his cloak closer. "Suppose it were true." He turned to Iohn. "Suppose you fell asleep and woke up hoondreds o' years on?"
"Go 'won," said Iohn. "Doona tell me ye believe in fairies!"


Niall laughed, not bothered by his ribbing. "I'll no tell ye sich. But 'tis no the only story, what Rabbie told, o' hoondreds o' years passin' when a man thinks 'tis but days or hours. Ye've heard the things Thomas the Rhymer claimed?"


"Aye." Iohn nodded. "Being whisked away by the fairy queen for three days and findin' seven years had passed. And they say there was ne'er a more honest man."

~~ from Blue Bells of Scotland

Book One of The Blue Bells Chronicles

The story of Thomas the Rhymer is among the most fascinating in Scottish history.  Notice I do not say Scottish lore or legend.  Thomas the Rhymer, also known as Thomas of Erceldoune, or Thomas Learmonth, is a historical figure, a contemporary of Alexander III, who in fact prophesied Alexander's death and warned the king not to set out for his new bride that particular dark and stormy night. He would have been an old man in Niall's youth.

I filmed several songs in the Eildon Hills where Thomas lived, and filmed at a particular stone there.  From my TravelPod blog:

We made a brief stop at the Rhymer's Stone.  This stone marks the place where True Thomas--Thomas of Erceldoune--Thomas the Rhymer (take your pick)--is said to have met the Fairy Queen who took him to Elfland for seven years.  Thomas the Rhymer is a fascinating historical figure who makes this claim of having spent seven years in Elfland, at the same time he was widely known as TRUE Thomas, because he could not tell a lie.  What do we, in our modern, scientific, cynical age, make of this paradox?  Having read about him on the internet is one thing.  Standing at this stone, marking the spot, gives one a little more pause.  It becomes a little more real. 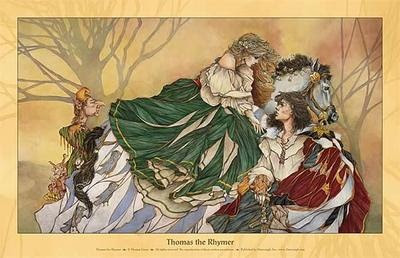 That's the whole story, in briefest terms: Thomas, the historical person who lived and worked with Alexander III, whose prophecies can still be read today, disappeared for seven years, and on his return, claimed to have gone into Elfland for three days with the fairy queen.  He was known as True Thomas because on his return (it was said by all who knew him), he was unable to tell a lie, in addition to having the gift of prophecy.

His story has been told and re-told for more than seven hundred years now.  Francis James Child, in his great catalogue,  recorded at least three version of a ballad about him, one of them beginning thus:

True Thomas he took off his hat
'O no, O no, True Thomas,' she says
'All hail, thou mighty Queen of Heven!'
For your peer on earth I never did see
And I'm come here for to visit thee
'That name does not belong to me
I am but the queen of fair Elfland....


Walter Scott published a third part to the Child ballad, and the ballad itself contains many of the same details of a 'romance' now believed to date all the way back to the late 1300s or early 1400s--very close to Thomas's lifetime.

A number of novels have been written about Thomas the Rhymer, including by Rudyard Kipling and by the great Scottish author of fiction and non-fiction, Nigel Tranter.  His story has been set to music, from modern rock groups to voice and piano to an opera (incomplete) by Ralph Vaughan Williams.

My posted videos set in Scottish locations with accompanying stories:

If you enjoy an author's blog, please consider following the blog, sharing, and/or liking on facebook.  It helps us continue to write!