The Feet Say Run is now available in Kindle and Print!

Welcome back to Dan Blum, in his third and final segment of his interview.  Speaking of interviews, I'll be on the Twin Cities' WCCO's Midmorning Show tomorrow morning, Wednesday, May 25, about 9:40.  Not surprisingly, I'll be talking about my own books and their continuing rise in readership. 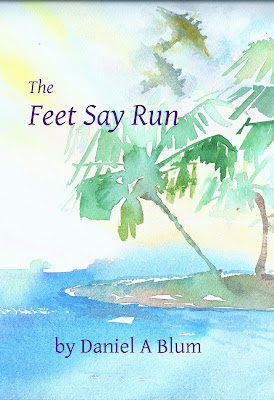 Dan's second book, The Feet Say Run, is being released by Gabriel's Horn Press this fall.  Having read it a few times myself, I highly recommend it.  It is the journal of 85-year-old Hans Jaeger, telling both of his life on a deserted island with 6 other castaways, and of his own, long life, from his youth in Nazi Germany and the Jewish girl he loved, through his post-war years in Germany and his older years in Iowa, trying to come to terms with his decisions of the past.

What writers have had the greatest influence on you as a writer?

I would say mostly they are from the previous generation – Updike for his prose and vision of America, Marquez for his surrealism and sweep of history, Barth for the humor that seems completely missing from contemporary fiction, also Nabokov for a very different kind of humor and surrealism.

These were some of the big names when I was starting to write, and I still think they were a remarkable generation. Going back further, there is Faulkner, who I was mesmerized by in college and in the years immediately after, and Henry Roth, whose Call It Sleep is still one of the unsung masterpieces, and showed how it is possible to be emotionally riveting in a highly literary, often stream-of-consciousness narrative.

What about current writers?

There are definitely some excellent writers out there, but overall I find myself pretty critical of the state of the novel as an art form these days.

T.C. Boyle is one of the current writers I really enjoy.  Drop City was a fantastic read. Donna Tartt’s, The Secret History was excellent, and The Goldfinch was also vastly better than most of what I pick up. I have also liked Jennifer Egan and Ann Packer and Elisa Albert. Patty Marx’s novel was the last really funny novel I’ve read, and it is great to see that the comic novel is not entirely dead. I’m sure there are many others I am not thinking of.

But truth be told, many other writers, even more celebrated ones, I don’t really understand what the excitement is about. Sometimes I find the reviews so over-the-top full of praise for books I find mediocre, I wonder if the critics are even being honest with themselves, or have lost the capacity to judge, independent of a writer’s reputation. I find this really troubling. A novel’s number one task is to engage. To not be boring! Isn’t that what the craft, and skill, and art is about? I truly feel we have forgotten this.

You have not been shy in your blog about criticizing other writers, including some highly-respected ones. You have also been critical of book reviewers. Do you regret that now?

Certainly, I have not done myself any favors if I had hoped for a review in the New York Times. But I said what I felt needed to be said, and what many writers are afraid of saying. And it was interesting that I received emails from a couple of fairly well-known novelists about how much they enjoyed and agreed with what I’d written. The NY Times Book Review is a great institution. I would never deny that. But it should not be immune to a bit of richly-deserved teasing.

As to criticizing other writers, my one regret is some worry about hurting feelings. I am not a mean-spirited person. I can imagine seeing something I had worked on for years lampooned by some upstart, and the genuine pain that would cause, and I do think of that. But honestly, I also feel that overall, and with some exceptions, our literature has taken a turn for the dull. And I know many others also feel this. So if we never criticize, if we accept the canon of contemporary literature that is handed to us from on high, in my view we are doing a disservice to literature itself.

To me it feels like recent National Book Award winners and nominees are largely of a particularly type: they have all gotten A+’s in English since they were eight years old, got a creative writing MFA from some distinguished institution, but have not necessarily lived, experienced, and suffered, and often the stories just feel flat to me. Prudish and humorless and stagnant. Perfectly crafted sentences that amount to nothing.

So, there is a serious point I am trying to make in my snarking. And it is one I feel needs to be made.

Thank you, Dan, for being here!

If you would like to connect with Dan, he is at

If you liked this article, you might also like
Howard Jay Smith (Beethoven in Love)
Courtney Conant (The Blood Moon of Winter)
Paul Clayton (White Seed: The Untold Story of Roanoke)
or other posts under the author interviews or authors labels