Dog Tales: Daley and the Dogs

Dogs have been with us for ages.  I'd be more specific but I don't have the time to research the exact year in which dogs became domesticated and we know how dangerous it is to make a statement online without backing it up with fifty-three sources--which will be discounted as 'not credible' by anyone who disagres anyway.  Wait, do I sound cynical?  Or--wait, do I sound cynical!

Really, that brings me right to the point.  There's a reason we love dogs.  (Well, there's another statement that could be taken exception to, as could my dangling preposition. Some people don't love dogs.  And I don't see this as any bad reflection on them.  Some people have had bad experiences with them, been chased or bitten by them.)  But for those who love dogs, it's because they're simple in a world of confusion.

The comment was made to me some time ago that a certain child probably loves dogs so much for exactly that reason. There is confusion, there are conflicting messages from the adults around him. He turns to dogs because they're easy to understand.

Dogs are straightforward, unlike people who all too often seem to speak in roundabout riddles and hedge and hope you can guess what they really mean, or sometimes outright hide information or tell direct lies.  With a dog, you know the truth.  You know where you stand.  (And hopefully it's not in the mess he just left in the yard.)

There's something else about dogs: They're great connectors.  People who would not otherwise talk to each other stop and talk over dogs.

It happens all the time in my walks with Liadan.  I'm often stopped and asked questions.  People lean out of their cars when I'm at stop lights waiting to cross, to ask about her.  Small children want to pet her and I've had whole crowds of kids surround her while their parents snap pictures. 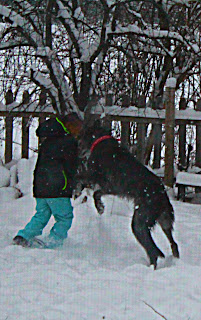 I've mentioned the neighbor kids in previous blog posts.  They come over now and again--knocking on the door and asking to play with Liadan!  They go out in the back and run around with her for 20 minutes, come in and cook with us or play the Xbox, and go out to play with her again.

What I like about all of this is, we all meet people we otherwse would not have, and everyone goes away smiling.  What more could we want from life than to have left someone happier?

I also see this in my own boys with other people's dogs.  On our recent trip to their big brother's graduation from boot camp, I'm pretty sure they managed to pet 90% of the dogs within the 11 states we crossed.

On Easter Sunday morning, we stopped at a rest stop between Denver and Glenwood Springs to take pictures and sure enough, Connor and John Paul made a beeline for the dogs in the parking lot, almost before I was out of the car.  In fact, I'm sure they were meeting Stella Blue before I dug my camera equipment out.

Hence, we met Stella's owners who told us about a free concert they had just attended the previous night, featuring all sorts of musicians from some pretty big name bands.

Next they moved on to Didgeridoo, Isadog, and...for some reason none of us can remember the third dog's name.  These three dogs were traveling with Daley, Kirsten, and Avery.  As I went to find the boys, I found Daley sitting on the curb behind his car with coffee boiling in a pot on his camping stove.  It's safe to say he and I come from different worlds.  He wore his hair in dreadlocks and beside his smoking coffee pot, he was smoking pot.  He seems to travel from one place to another holding jobs as a cook.  He was also kind to my boys, and when I came around the car, looked up and asked, "Do yo want a cup of coffee, Sister?"

Truth is, I had just downed a cup of coffee on the road.  I'd stopped to take pictures.  We had mapped out four potential churches to attend Easter Mass so there were some time constraints.  But I believe there's a drive and a need, in human nature, to give and accept hospitality.  I've written elsewhere about such moments, about the deep meaning of the gift of food.

Maybe it's really about the need to connect.  Maybe stopping and sharing coffee is a way of saying Thank you for being kind to my boys.  Maybe it's simply that people are endlessly interesting and our worlds expand when we get to know others.  I accepted the coffee and I think I may have ended up having a second.  I don't remember.

And we talked for a long time.  He told me about his dogs.  As a trombonist, I couldn't help but be interested in a dog named Didgeridoo!  (Playing didgeridoo seems to be a 'thing' among trombonists.  Kilt Thursday is a 'thing,' too, by the way.  If you haven't already, you should really commit to wearing kilts to dine at Asian restaurants on Thursdays.)  He explained Isadog's name.  If the dog could talk, he said, he would say, "I's a dog!"  I.e., I is a dog.)

He told me about his recent (very interesting!) experiences at a job, that he's a very skilled chef, and about some of his interesting experiences.  He told me how he and Avery met.  Avery had run out of gas, I think, and was stuck on the road.  Daley picked him up and helped him out and so they started traveling together.

Yes, we come from different worlds.  He's a pot-smoking dreadlock-wearing Shaman while I was heading to Easter Mass with 3 of my 9 children, on our way to a Marine graduation!  But we enjoyed each other's company.  I enjoyed hearing about his life, his heritage, his experiences, his views on multiple subjects.  He and Kirsten recommended a couple of hot springs in Glenwood Springs that were free to go to.  (Unfortunately, we weren't able to go to them.)

And as always, I thought that we all have things to learn from each other, regardless of our differences.  How often have I stopped to help someone in need on the highway?  Never.  Shawn's father does, in The Blue Bells Chronicles, and I suppose that's because I admire people who do.  But I'm afraid to do it myself or in too much of a rush or I think I can't really help them anyway.  Daley does, and as a result, made a new friend in Avery.

How often have I offered hospitality to someone at a rest stop?  Never.  Why not?  Because we're all in a rush.  Because as a society, I think we are losing trust in each other and tend to keep to ourselves more than we should.  Because I'm afraid people might look at me funny and act like it's a strange thing to offer coffee to a stranger.  Daley does offer hospitality to strangers and as a result, we all had a better day for it.

Our plans got thrown off a little bit, we missed the Mass we planned on and ended up at a Spanish Mass where we couldn't understand very many words, but found the music and the energy and joy beautiful!  As with Bruce and the Moose...life is what happens when you're making other plans!  Thank you, Daley!