Be sure to scroll to the end of the post to learn about the Lucky Leprechaun Blog Hop and your chance to win dozens of books or book-related products!

**Please note that I got an early start due to my schedule, and many of these blogs may not have their posts up until midnight**


The Scottish-Irish Connection
﻿
For hundreds of years, the Highlands of Scotland shared more culture with Ireland, across the water, than with England, on its southern border. For 18 months in the early 14th Century, Ireland even had Edward Bruce, brother of the Scottish king, Robert the Bruce, as its High King.
Like the best stories, it all started long ago, and far away. Of course, that’s relative. For those who lived in ancient Ireland, the story was neither long ago, nor far away. At the end of the 2nd Century, there lived an Irish prince, Cairbre Righfada, who distinguished himself in battle. In reward, he was given what is now County Antrim, Ireland, and the Argylshire area of Scotland, both of which he named Dalriada. The Picts of Scotland, however, were powerful, so Cairbre Righfada and his descendents remained in Antrim for another two hundred years. In the 500’s, his descendents, Loam and Fergus, became the first kings in the Scottish Dalriada. Fergus’s descendent, Kenneth MacAlpin, united the Scots and Picts in the 9th century to become the first king of all Scotland.
Through these years and beyond, thanks to their common history, the two countries shared a great deal. Even the name Scots derives from scoti, the Roman name for the Irish people, which Fergus and Loam brought with them. The languages of Irish and Scottish Gaelic, although distinct today, both derived from Middle Irish. The music of harp and bagpipes, the myths and legends, and forms of dress were all similar in the Highlands and Ireland. Even their saints passed freely from one country to another: Columba and Fillan, two of the great Scottish saints, were both Irish, while some say St. Patrick, the most famous saint of Ireland, was born in Scotland. Family trees stretched their branches wide across the Irish Sea.
The line of Cairbre Righfada continued more than a thousand years, to Scotland’s Alexander III. It is his death, in 1286, that precipitated the Wars of Independence, and brought Robert Bruce, King of Scots, a descendent of the great Irish king Brian Boru and the kings of Leinster, back to his Irish roots.
In 1314, Robert the Bruce led Scotland to resounding victory over England’s might, yet Edward II of England continued to hold Scottish castles and assert his right to rule. Like Scotland, Ireland had long suffered English occupation. The Ulster chiefs, encouraged by Bruce’s success at Bannockburn, and regarding him as part of their own nation, thanks to his heritage, invited Edward Bruce to lead them against the English and become king of Ireland. With such strong familial and cultural ties, it is no wonder the Bruces attempted to unite militarily against their common oppressor. Bruce wrote to the Irish kings: Whereas we...share the same national ancestry and are urged to come together more eagerly and joyfully in friendship by a common language and by common custom, we have sent you our beloved kinsman...to negotiate with you in our name about permanently strengthening and maintaining inviolate the special friendship between us and you, so that with God's will our nation (nostra nacio, referring to Scotland and Ireland as one nation) may be able to recover her ancient liberty.
In May 1315, Edward Bruce sailed to Ireland with 6,000 men, landing on the coast of Antrim from which his ancestors had come. After a year of successful battles, he was crowned High King in May 1316. However, the Irish chiefs beyond Ulster were not so enthusiastic about Edward Bruce. They regarded the situation not as military unity, but as a Scots invasion, not so different from English occupation. In October 1318, Edward’s brief kingship ended with his death in the Battle of Faughart. Ironically, or maybe not, considering the long history of shared culture , Ireland’s last High King was a Scot. 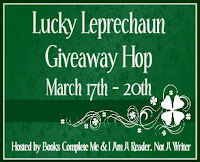 ﻿
Now, for our Lucky Leprechaun Giveaway.  The rules are simple.  For my blog, just click follow﻿ in the right sidebar and leave a comment with your contact information and telling me who you are among the followers.  You're entered for the drawing of one signed print copy of my book!  (Or an e-copy if you prefer.) Easy!  Don't forget to leave contact information, so I can let you know if you won.
Now, click on the the blogs below.  Each one is hosting a giveaway.  Each one should have the same list of blogs at the bottom of their page, so just keep clicking through.  The more you enter, the better your chances of winning...or winning multiple items!
Have fun!
Email Post
Labels: blog hop Brian Boru cairbre righfada Edwward Bruce st. columba st. fillan